8/4/2021
Kaitlin Resler
As the class of 2021 started their last semester at Emma Willard School, one senior was working hard to measure one of the fundamental constants in the world: the Universal Gravitational Constant. Alongside Science Instructor John Ball, Sophia Arnold ’21 performed an experiment typically done by upper level college students. Examples of other successful experiments online proved rare, so they decided to produce their own video illustrating the results.
The kernel of inspiration that led to the experiment comes from Sophia’s love of physics—having taken AP Physics I and AP Physics II in her 10th and 11th grade years, by the end of her time at Emma she had run out of physics classes to take. The unique constraints of the COVID-19 pandemic also created barriers to her independent study options.“I want to be a physicist, so it was really sad for me to run out of classes,” she says. “I wanted to try and maybe take a college class, but it just never worked out because of COVID.”
With approval from the school, in February 2021 Mr. Ball and Sophia worked independently on smaller-scope lab experiments before attempting one that could help them find the Universal Gravitational Constant (The Universal Gravitational Constant, abbreviated as ‘G’, relates the size of the gravitational force between two objects to their masses and the distance between them. It is extremely difficult to measure in an experiment). Sophia recalls the day leading up to starting the experiment, wondering what lab they would be embarking on, and being surprised by the choice: “[Mr. Ball] was like ‘we can try this, it might not work, but if any student can do it, you can do it Sophia!’”
It took approximately two months to find the measurement, though the process wasn’t without hiccups. Part of the work became delayed a week when the hair-width cable integral to the measurement broke. Sophia was juggling the numerous end-of-year events in a senior’s schedule with time in the lab. By mid-March they started the experiment in earnest, and the hard work paid off. On the wall in the lab where they achieved the results is a small, handwritten note. Between two red dots, marked S1 and S2, it reads:
Equilibrium position of laser
May 3rd, 2021
Measurement  of ‘G’
S. Arnold + J. Ball
The process for this lab was different from one found in a regular physics lab at the high school level, where an experiment is carefully planned to fit into a class period and the results are known and expected. This was a different kid of experience, a reflection of actually doing science, and a glimpse into graduate-level coursework.
“I was testing things out, working on the experiment, the apparatus, learning and making mistakes,” Sophia says. “It takes so much patience, it's a lot of time that you have to put into this lab to get it to work. It took us three days to get our values. Not a lot of people are willing or able to do that for a high school lab.”
There were other complications along the way, and little help available from others who had performed similar experiments. They found other physics teachers who performed similar labs, but who weren’t able to measure what they were doing due to instrument limitations. The equipment needed to find such a measurement is extremely sensitive, expensive, and so rarely is the experiment successfully performed that even the manufacturers of the equipment were sometimes unable to help with troubleshooting: there just wasn’t enough information. That was part of the motivation for creating their own video (the other was how incredible it is that Sophia, a high school senior, worked out an experiment normally reserved for students at the university level).
“We had no idea what we were going to get or that we would come so close to the actual value,” Sophia recalls, her pride in such an achievement palpable. “I think we were within 2.5%, which is incredible when you’re measuring something so tiny that requires a lot of precision.” (The actual measurement is 6.67408 × 10-11, Sophia’s calculations landed at 6.56 x 10-11.)
After their success, Mr. Ball and Sophia prepared to record how they did it. Filmed in just under an hour, the 11 minute 22 second video (available on YouTube) shows Sophia not just working with the equipment, but explaining complicated concepts to viewers in a relatively accessible way. Detailing how she prepared to narrate and explain, Sophia references Physicist Richard Feynman.
“One of his big mottos was that you should be able to explain your work to a layperson and they should be able to understand it, otherwise you don’t understand it. We had to simplify some of what we were saying because some things we don't even understand! We realized when we started to get into the complicated language—we said, what does that actually mean? I learned a lot about the lab just from talking it through.”
Towards the end of the video, Sophia derives a formula. She works fast (the video is sped-up slightly, but there is no hesitation in her writing), and her joy in the process is undeniable.
“The derivation, I practiced it so many times! One of the most satisfying things in physics for me is being able to predict things based on knowing other values. It’s just really satisfying. I love it! That was probably my favorite part of filming!”
This fall, Sophia is attending Cornell University. “I think I’m going to double major in electrical engineering and physics. If not, I might just major in physics. But I really hope to go to grad school and become a physicist!”
We’re going to echo Mr. Ball here, and say, if anyone can do it, you can do it Sophia!
Back 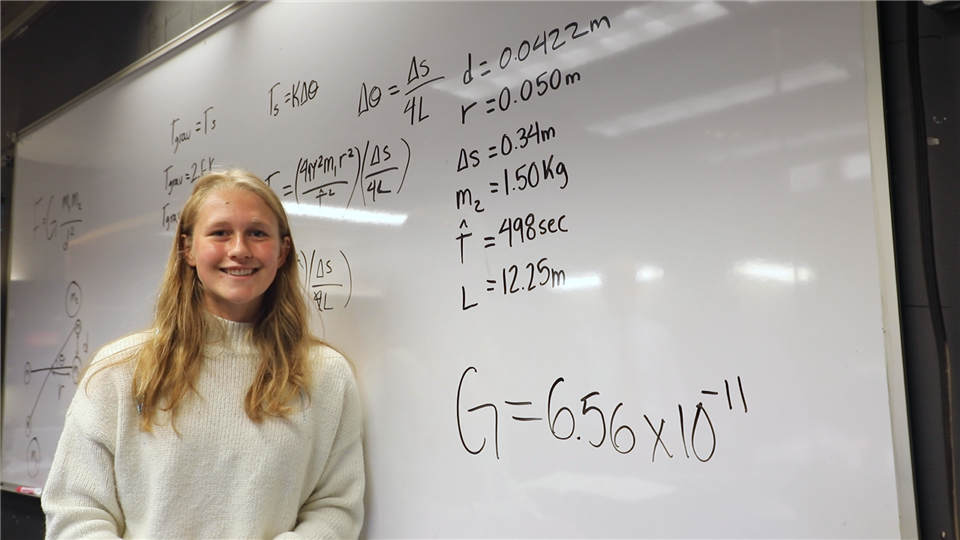 Sophia Arnold '21 with her measurement of the Universal Gravitational Constant 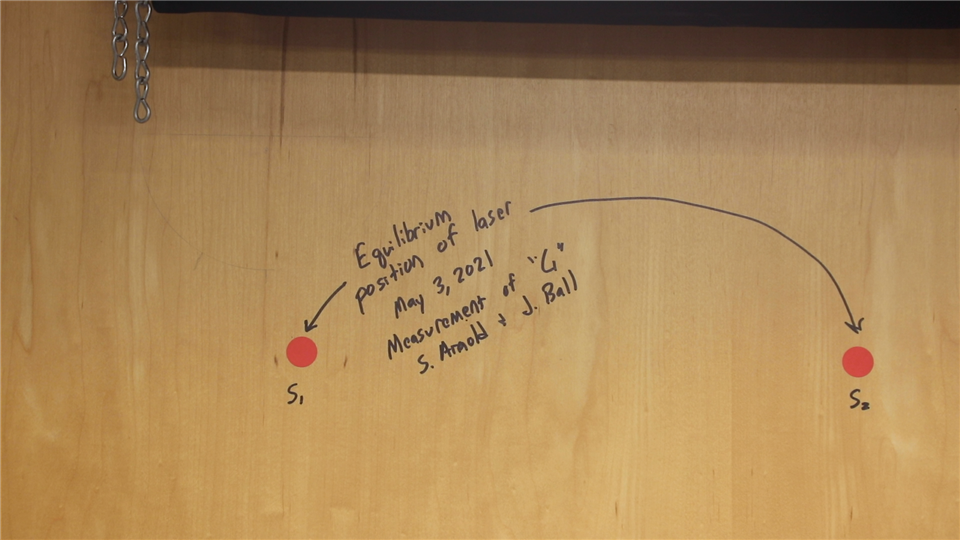 Note on the laboratory wall that reads: Equilibrium position of laser May 3rd, 2021 Measurement of ‘G’ S. Arnold + J. Ball 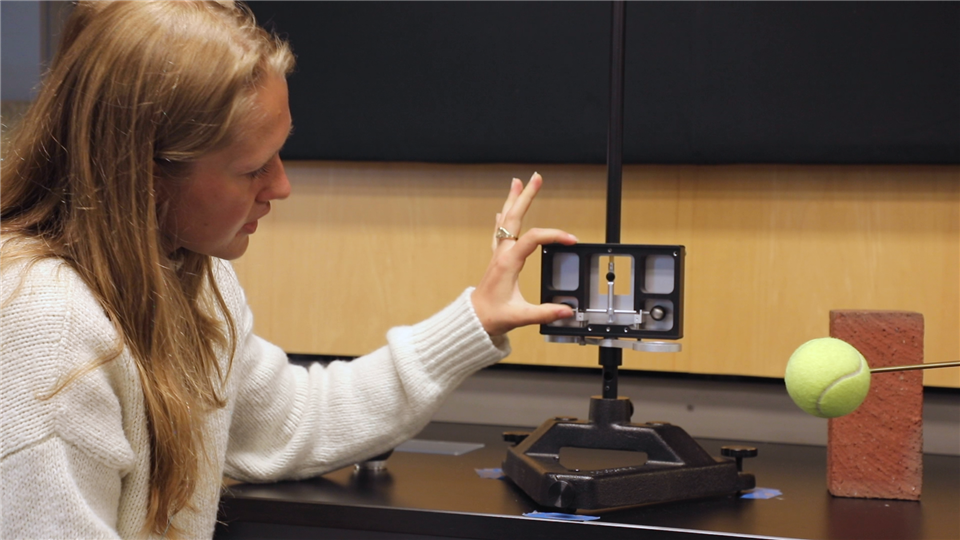 Sophia Arnold '21 explaining the equipment used in the experiment